Now, the land of the demons 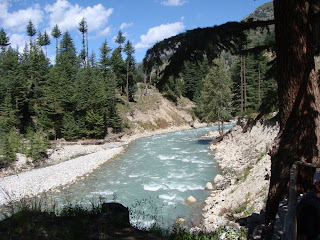 The Baspa river a tributary of the Sutlej hurtles down the Sangla valley in Himachal’s Kinnaur district, enveloped between the Great Himalayan and Dhauladhar mountain ranges. For centuries this has been a pristine place of outstanding natural beauty where mountain passes remain closed for six months of the year. It is a land of apricot, peach and apple orchards and lies on the ancient trade routes between India and Tibet. Legend has it that in this lush terrain lived the descendants of the ‘Kinners’, the demi-gods of the Hindu pantheon whose deeds have been immortalised in epics and in the writings of ancient Sanskrit poets. Sadly, over the last ten years this has all changed. 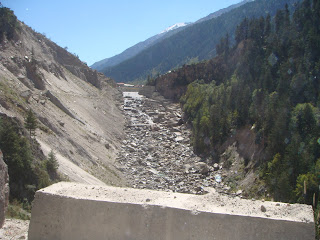 Jaiprakash Hydro-Power Limited owns and operates a 300 MW power project which has destroyed completely an entire region. Jaiprakash’s website claims that its hydro power is environmentally friendly and non-polluting. Nothing could be further from the truth. The project has in fact ruined the local ecology. Thousands of trees have been felled and the original course of the river altered. Land slides are frequent and a once spectacular region is left in devastation.

The project has more than once suffered the fury of the Baspa river. In June 2000, flash floods claimed hundred of lives and thousands of tonnes of equipment. Excessive rains in the river’s catchment zones, some of which are located across the border in Tibet, results in the creation of underground and surface lakes. Eventually the mountain caves in when water pressures become excessive and a massive flow takes place without a hint of advance warnings. In 2005 a wave measuring 40 feet swept through the valley destroying everything in its path. Nature has its ways of getting back and it’s only a matter of time that this will happen again, only this time with 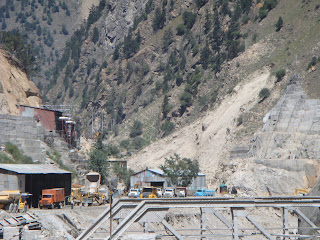 greater ferocity now that the traditional flow of the river’s waters have been dammed.

Jaiprakash intended to construct another project a few miles upstream but fortunately the collective resistance of local communities has, at least for now, put that on the back burner. Such projects should never be allowed happen. They only do so because of a corrupt political system and under the garb of development and employment creation. The fact is, very little local employment is created either during construction or the operation of such plants. Workers compromise mostly of migrants from economically deprived provinces and often from neighbouring countries who are prepared to risk their lives and live and work in the most unsuitable conditions.

It is important for banks and financiers to understand the consequences of their investment. Project sponsors go for funding under the blanket of setting up something environmentally friendly. For some odd reason hydro power is considered less damaging than coal and in some instances that may well be true. For instance mini hydro projects whilst not completely environmentally sound are certainly less damaging than major ones. The cost benefit equations could at a stretch justify their creation. But large scale hydro-power plants are rarely defensible if social and environmental costs are taken in to consideration. Lenders and investors who participate in such projects are in reality socially and environmentally most irresponsible.

The tragedy is such things will continue despite the resistance of local communities. There is a lot of money to be made – longer term consequences be damned. For the people of Kinnaur, the Baspa river will never be the same again and neither will a way of life that their forefathers have enjoyed for thousands of years. What once was truly a land of the Gods is now a place only fit for demons.