At our 21st Annual CEO Roundtable in Thimphu last week, there was spirited debate over the performance of the current administration. A participant suggested that the Ujjwal Discom Assurance Yojana (Uday), a scheme to reform India’s downstream power sector, for all its fanfare was actually a failure of sorts and that India’s renewable energy programme, specifically on solar energy, was lacking on many counts. Whilst it was my intuitive belief that both claims were unsympathetic, I thought it would perhaps be in order to examine the facts in detail and subsequently provide an assessment. This paper, accordingly, presents an analysis of the first of the two issues – the Uday programme. The second will be addressed in a subsequent piece. 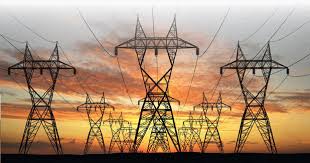 Electricity distribution has been disastrously managed over the last three decades and in 2015 was on the verge of absolute collapse. Under-priced power, operational inefficiency, broken equipment, rampant theft and political meddling had resulted in distribution companies (discoms) hoarding losses of Rs 4 trillion on their books. They were incurring damages of Rs 0.60 per unit of power sold, had outstanding receivables of Rs 0.96 trillion (almost a fourth of revenue) and were losing 25% of their output to Aggregate Technical and Commercial (AT&C) losses, a proxy for theft. Most discoms were bankrupt and unable to generate cash even for routine expenses. Banks refused to extend working capital loans and generation companies, which were collectively owed Rs 1.3 trillion, were threatening to cut off supplies. Few would remember that at one point interim court orders and desperate pleas by politicians were the only reasons households were still receiving electricity in some states. In short, the situation amounted to what is generally described as a nightmare.

Distribution, in India’s constitution, is a sector that falls under state control and therefore not amenable to central diktat. In 2012, the Government came up with a programme called the Financial Restructuring Scheme (FRS) to fix the problem but failed in the absence of state buy-ins given the broken nature of centre-state relations at the time. Subsequently, in 2015, the current administration launched Uday, which to begin with improved upon the terms of the FRS, but more importantly, was sold effectively to the states in a backdrop of more positive federalist relations. A dozen signed up within six months and as of November 2017, a total of 31 states have entered its fold.

Uday: terms of reference
Under Uday, state Governments are to assume 75% of the accumulated losses of their discoms and issue state development loan (SDL) bonds in lieu of these. The proceeds are to be given to the discoms in a mix of equity and grants. The SDL bonds would be priced at G-sec plus 0.75%, which is lower than the interest rate currently being charged to discoms on their debt (~12% pa). The balance debt of 25% would be re-priced at base rate + 0.1% or securitised in the form of state Government-backed discom bonds and offloaded in the market. In this manner, discoms’ overall debt would be reduced with high cost loans replaced by lower cost ones together with some equity. Once the balance sheets are cleaned up, any future losses incurred by the discoms will be borne 50% by the state Government. This should align their interests and incentivise governments to manage their discoms better (e.g. by allowing correct pricing of power and investing in equipment and technology) or so the logic goes. 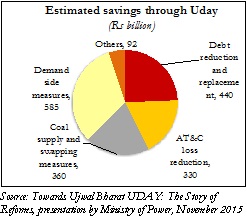 On its part, the central government would provide funding support to participating states to beef up their distribution systems (transformer upgradation, metering, consumer indexing, GIS mapping, etc). They would also be supported with measures like additional coal supply at reduced prices, low cost power from NTPC and demand reducing measures such as LED bulbs, energy efficient appliances, etc. States were given targets for shrinking distribution losses, pricing electricity to eliminate under-recoveries, installing metering and transformer equipment and, ultimately, turning profitable by 2018-19. If both state and central Governments do everything they are supposed to, discoms would achieve savings of an impressive Rs 1.8 trillion over the implementation period (see chart).
Progress so far

Progress so far whilst not remarkable has been reasonable. The most visible bit is the issuance of state Government bonds intended to write off 75% of discom debt. Of the Rs 2.7 trillion to be restructured, bonds worth Rs 2.3 trillion have already been issued implying a healthy appetite in the financial markets. This has led to savings of around Rs 160 billion in interest costs in FY17, a figure that will rise considerably in FY18 as state Governments transfer bond proceeds as grants to their discoms and the full year benefit of de-leveraged balance sheets is realised. In terms of under-recovery on the sale of power, the average gap between cost and realisation has dropped by about 50% from Rs 0.60 per unit to Rs 0.35 per unit. This is credible and was made possible by reducing the costs coupled with tariff hikes. Ten of the largest states have raised power tariffs by higher percentages than they were required to for FY18 and some others are likely to follow. In total, 25 states have announced revised tariffs although unsurprisingly not all have implemented them yet.

The all-important statistic, AT&C loss, currently stands at an average of 23.2% across states. This is a marginal improvement over the pre-Uday level of 25% but still short of the target 20.8% set for FY17. One reason is the problem of shoddy billing. Prior to Uday, discoms’ average billing efficiency was below 80% i.e. over a fifth of sales were not even billed, due to lack of metering or monitoring. To fix this, discoms need to invest in meters, new connections, audits, GIS mapping and consumer indexing.

At a softer level Uday has some success. It has for instance promoted a spirit of both cooperation and competition amongst states. Those that achieved targets in certain areas have come forward to share their experiences and the federal Government has sought to institutionalise this practice. The publication of state rankings on the Uday portal has promoted a healthy degree of competition amongst states to outdo each other.

In conclusion: much to be done but progress is steady
It seems logical that an initiative designed to undo three decades of mismanagement without the backing of a diktat-based solution will take time to deliver results. States have to be persuaded rather than compelled to fall in line and, given the nature of India’s political fabric, this is a perennial challenge. In view of these factors, the successes achieved under the Uday programme are not insignificant. As the results of early initiatives begin to bear fruit, states are likely to increase their efforts and under a central Government that has demonstrated a strong sense of cooperative federalism, this should lead to improving outcomes in the years ahead.

June 13, 2018
Over the last three months, I have had the opportunity of engaging with our clients across various forums and cities. What provided a platform for this interaction was my briefing on four critical initiatives that we believe will, if properly implemented, serve as game changers with a palpable impact on economic output. The question that consistently came up almost everywhere was on the perception of jobless growth and consequently, rising unemployment within India. This has possibly been based on recent press reports and television debates that consistently cite certain headline statistics. These suggest a fall in employment levels between 2011-12 and 2015-16 compared to vigorous growth in earlier years, since 2004-05. Even on the surface, this conclusion does not gel fittingly with other statistics. For instance, indirect tax collections and consumption expenditure, which are both proxies of aggregate spending and wellbeing, do not corroborate falling employment. Tax collections
Post a comment
Read more

All the Prime Minister's Men

June 16, 2009
The composition of Prime Minister Manmohan Singh’s cabinet would suggest a desire to resume the process of reforms, which had practically stalled during his somewhat uninspiring previous term. It is also indicative of a more assertive Congress Party within the larger coalition of the United Progressive Alliance. The Congress has retained key economic ministries and also taken control of other important ones that were previously with their allies. With Pranab Mukherjee at the Treasury, P Chidambaram at Home and AK Antony at Defence, three crucial departments appear to be in the most capable hands. Mr Mukherjee, possibly the senior most member of the Singh administration, has over the years served in various positions in the government. He was India’s Finance Minister between 1982 and 1984 in the Indira Gandhi cabinet and brings to the table considerable technical competence and robust political acumen. Disinvestment of state-owned enterprises; financial sector reform; the implementat
1 comment
Read more